Block Island lies to the south of Mainland Rhode Island. It is known for its historic buildings, 17 miles of sandy beaches, and its beautiful wildlife preserve. Visitors can enjoy the island on foot, on horseback, by car or moped or with a breathtaking helicopter ride.

Several thousand years ago, as the glaciers melted, they left behind a stunning feature formed with scenic hills and crystal lakes. The island’s first inhabitants were the Narragansett Indians. They called the island “Manisses” which translates to English as ‘island of the little god.’ This beautiful location is now the popular destination Block Island.

Dutch explorer, Adrian Block – Click here for a great article about the island’s namesake >>> – , reached the island by boat in 1614, giving it its current name. Block Island was settled some 47 years later. During the Revolutionary War, the islanders lit fires atop Beacon Hill, which is Block Island’s highest point, to signal that the enemy had been sighted. Beacon Hill stands 211 feet above sea level, and in 1800 an observatory was built on the hill’s crest. Formerly a popular tourist attraction, the lighthouse is now a private home.

The island’s first lighthouse was erected in 1829 on Sandy Point. The present lighthouse, currently the fourth to be built at this location, was built in 1867. The Northlight lighthouse is open for public tours. Erected in 1873, the Southeast Light initially stood on the cliffs 150 feet above sea level. It was moved back 200 feet in 1993 due to the erosion of the bluffs.

In spite of the lighthouse beacons, at least four major shipwrecks have occurred off Block Island over the past 260 years. The earliest recorded was in 1738 when the Princess Augusta caught fire and sank off Sandy Point. During 19th century accounts of the shipwreck, the vessel became known as the Palatine. According to local folklore, the Palatine Light is an apparition of the lit vessel which can be seen in the waters of Block Island.

Sandy Point was the location of another shipwreck in 1831. The Warrior, a two-mast schooner, was carrying passengers and goods from New York to Boston. While the ship was anchored west of Sandy Point, a gale blew up driving the ship onto Sandy Point. Unfortunately, none of the crew and passengers could be saved.

The Larchmont steamer, traveling from Providence to New York, collided with the three-mast schooner, the Harry Knowlton in 1907. The steamer sank in less than 30 minutes. Of the 200 passengers and crew members, only 19 survived.  Click here to learn more about this amazing tragedy >>>

In 1939, the Lightburne, a 416-foot tanker owned by Texaco, ran aground at the location of the Southeast Lighthouse. The ship was carrying 72,000 barrels of gasoline and kerosene. The crew

was saved, and the Lightburne was blown up with dynamite to prevent a navigational hazard. This shipwreck remains a favorite spot for scuba divers today.

Things to See and Do on Block Island

Though the initial lighthouse at this location was erected in 1829, the current edifice, now the fourth, was built in 1867. The light was deactivated in 1973 and placed on the National Register of Historic Places one year later. It was renovated by the North Light Commission in 1984. Since 1993, the historic building has been opened as a museum. Though it has no foghorn, the lighthouse utilizes a fourth-generation Fresnel lens which emits a bright flash every five seconds. Today most of the lighthouse’s power is generated by solar panels and wind turbines.

The 1661 inn is spread over nine elegant properties and houses 73 rooms. The resort-like environment is renowned for its full champagne buffet breakfast, which is open to the public each morning. Across the street from the inn are the 1661 Farm and Aviary, where visitors can enjoy a diverse menagerie of animals such as llamas, fainting goats, camels, black swans, and red kangaroos.

Block Island’s Sacred Labyrinth is located just off Corn Neck Road. Built from stone, the labyrinth overlooks a stunning view of Sachem Pond and the North Lighthouse. Unlike traditional mazes, the Sacred Labyrinth follows a single, spiral pathway which leads to its center and back out again. Labyrinth walking is an ancient ritual designed to provide serenity and healing for the body and the soul.

For visitors who want to relax on a gorgeous sandy beach overlooking the ocean, Ballard’s beach provides the perfect venue. Beach chairs and umbrellas are available to rent. VIP cabanas with a table, chairs, and a personal server are also available at a daily rate. Ballard’s hotel is just a 3-minute stroll from the Ferry landing. The casual but comfortable rooms feature air-conditioning, free Wi-Fi access, and flat-screen televisions. Other amenities include private beach access, seasonal live music, and a popular seafood restaurant.

The Clayhead Nature Preserve is located at Block Island’s northeast point and boasts some of the most breathtaking views on the eastern seaboard. Visitors flock to the 150-acre preserve in the fall months to see incoming migratory songbirds. The Clayhead trail stretches about 1/3 of a mile east towards the ocean. Along the trail, ramblers can enjoy Littlefield Farm and Clay Head Swamp. The trail’s intersection allows visitors to stroll to the beach, or continue up to the eponymous clay bluffs. There are also a number of intertwining trails for visitors who want to wander while admiring the scenic views. As well as migrating songbirds, and a wide range of indigenous plants, nature lovers can also catch a glimpse of the endangered yellow-crowned night heron.

The Block Island Maritime Institute (BIMI) is a great venue for those who wish to participate in maritime activities; it is suitable for all ages and provides a great day out for the whole family. During summer, the BIMI offers a range of educational programs including a tour of the harbor, aquaculture workshops, squid dissection, and an expedition of coastal wildlife habitats. Kids love exploring the outdoor touch tanks, which house a variety of indigenous marine creatures such as squid, horseshoe crabs, oyster toadfish, and colorful sea urchins. On Tuesday nights, the BIMI also hosts a lecture series presented by authors, historians, and scientists.

Considered by many to be one of the most beautiful areas of Block Island, Mohegan Bluffs is a secluded place to surf and swim. The large, clay cliffs reach a height of 150 feet. Visitors must climb the 141 steps to reach the beach area, known as Corn Cove, but it’s definitely worth the effort to see the dramatic views of the Atlantic Ocean. 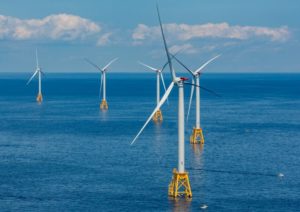 Towering 600 feet above the Atlantic Ocean three miles south of Block Island lies the first and only offshore wind farm in North America. Erected in 2016 it is made up of 5 wind turbines total consisting of 3 blades each with each blade extending approximately 250 feet. Prior to 2017 Block Island was powered by diesel generators resulting in high utility prices and inconsistent power. Now, Block Island is receives its electricity from the offshore windfarm.

Winfield’s Restaurant is an example of fine dining at its best. Self-taught Chef Berke Marye has created a sumptuous menu influenced by Italian, French, Asian, and New American cuisines. Many of the sophisticated dishes feature local farm-raised poultry and beef as well as fresh, locally farmed vegetables. Diners can enjoy their meals in the elegant, intimate dining room which makes a perfect place to enjoy a drink and nibble on appetizers or to take time over a full meal.

Visitors to Block Island never leave without sampling New England’s fine seafood, and the Spring House Hotel comes highly recommended. Diners can take in the beautiful views of the Atlantic Ocean while enjoying one-of-a-kind cuisine. During the peak season, the culinary team creates succulent dishes with vegetables and fruit grown in their own garden. The restaurant is open for breakfast, lunch, and dinner during the summer. Their menu includes the freshest seafood, local poultry and meats and an assortment of cheeses. The dishes are complemented by a varied wine list and hand-crafted cocktails.

For a casual night out, what’s better than beer and seafood? Dead Eye Dick’s offers a great combination of both. Diners can enjoy lunch and dinner inside or on the deck and then hang around for the views. Appetizers include steamed mussels, fried oysters, and tuna tartar. The lunch menu also offers a variety of seafood menus, while the dinner menu tempts with mouthwatering dishes created with swordfish, salmon, mako, and snapper.

Captain Nick’s has been hosting rock, tribute bands and cover bands since it was built by Captain Nick DePetrillo in 1976. It’s the perfect venue for good music and good times. During peak season visitors can enjoy family fun on the deck listening to a local artist. After dark, it’s 21 and over and patrons are entertained by a D.J. or band inside the club.

Block Island’s Club Soda offers a vibrant combination of beer, cocktails, karaoke, and live bands all-year-round, so it’s a great place to meet the locals. The club has won awards for its clam chowder and its famous mudslides. It’s also renowned for its dramatic panorama of the island as it was in 1949, created by local artist H.D. Wetherbee. Club Soda has something going on every night of the week, such as pool tournaments, trivia, open mic, and live music.

For those searching for a more intimate atmosphere, Mahogany Shoals is the perfect venue. It’s located on Payne’s Dock in New Harbor and is open all-year-round. This dockside hideaway has nautical décor and an upstairs and outside bar with exceptional views. Patrons can enjoy live music each night. One of their popular artists is Irish folksinger Walter McDonough, who likes to intersperse his songs with quotes from his favorite Irish poets.

Blues On The Beach

Blues On The Beach takes place every Wednesday during Block Island’s peak season. Patrons can wind down their day listening to live blues bands. Visitors are welcome to relax on a beach chair or dance on the sands to local musical artists. The entertainment starts around 6 p.m., so it’s early enough for the whole family. In case of inclement weather, the location shifts to Captain Nick’s.

This popular Block Island music fest has been taking place since 2001. The week-long extravaganza attracts as many as 50 unsigned bands from throughout the United States. The event takes place on the second week in June at Captain Nick’s Rock n’ Roll Bar. The festival is for 12 and over and the admission is free.

Whether you are visiting Rhode Island’s Block Island or relocating, you will find the region has not only beautiful scenery and wildlife but also a wide array of amenities from comfortable, friendly hotels and inns and great shopping, to gourmet restaurants and interesting nightlife. One of the best ways to take in the whole island is with a chartered helicopter ride.